Te general idea is setuid sudo and friends dont use an unprivileged users environment. 24022010 A attacker can exploit setuid binaries using a shell script or by providing false data.

In other words the group ID of the process will be the same of that of the file. 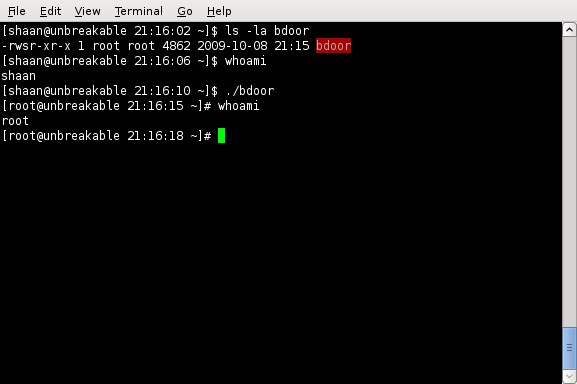 Sometimes an admin might create setuid permissions for a common program to run as root. The following offers more reading. 12012014 The operating system is wise to these sorts of tricks and most are remediated now.

At a high level were just going to copy the binary and insert some shellcode. Note that modern interpreters will refuse to run scripts on the command line when EUID UID so the cmdunixreverse_perlruby payloads will most likely not work. Now that we know the setuid attacks works create a password hash.

Unfortunately even completely benign looking programs can be misused by an attacker. 25092017 SUID Set User ID is a type of permission which is given to a file and allows users to execute the file with the permissions of its owner. Exploiting SetUID Programs III.

Www-datahaircut tmp cat getrootc include int main void setgid0. If you have any doubt on an application google should help you find out if its a regular linux application. 08062018 Unlike the setuid bit the setgid bit has effect on both files and directories.

These are usually Trojan Horses kind of programs. 25082020 On this box youll encounter this error when you try the exploit which runs gcc to compile code. Exploit CAP_SETUID file capability If you are a simple user exploiting a file with capabilities you probably have a bounding set full.

22112018 Presumably the real exploitable program has suid bit set in the file permissions so it can perform the setuid0 call. And one pops straight to my face as a permission misconfiguration. That means if a file.

I guess the purpose of the exercise is to demonstrate how all input needs to be sanitized when you are dealing with suid programs including things like relative paths which effectively take current working directory as input like any user-supplied paths and other. 31102018 Because my task is about Exploiting Setuid Programs of course I started searching for getuid and setuid programs. This Metasploit module abuses a setuid nmap binary by writing out a lua nse script containing a call to osexecute.

In this post we look at an alternative to compiling shared object files when exploiting vulnerable setUID programs on Linux. This bug probably has relatively low severity given that there arent many services yet that use DynamicUser and the. 21112018 The file usrbinmyexechas the setuid bit enabled and is owned by root.

By the way this specific program caught our attention because its the only unknown program of the list. Your mission is to get a root shell on the box. There are plenty of reasons why a Linux binary can have this type of permission set.

Since this program is a SETUID root program an unprivileged user can exploit the buffer overflow to gain a root shell. 26042019 This bug report describes a bug in systemd that allows a service with DynamicUser in collaboration with another service or user to create a setuid binary that can be used to access its UID beyond the lifetime of the service. Users normally should not have setuid programs installed especially setuid to users other than themselves.

Our goal is to get a root shell by exploiting the stack buffer overflow vulnerability. No such file or directory. If all you want is a setuid binary to break into the system.

For example the ping utility require root privileges in order to. For example you should not find setuid enabled binary for root under homevivekcrack. In the first case the file which has the setgid bit set when executed instead of running with the privileges of the group of the user who started it runs with those of the group which owns the file.

Next we run the target with the current user pi. This is done to allow regular users to perform a routine task. 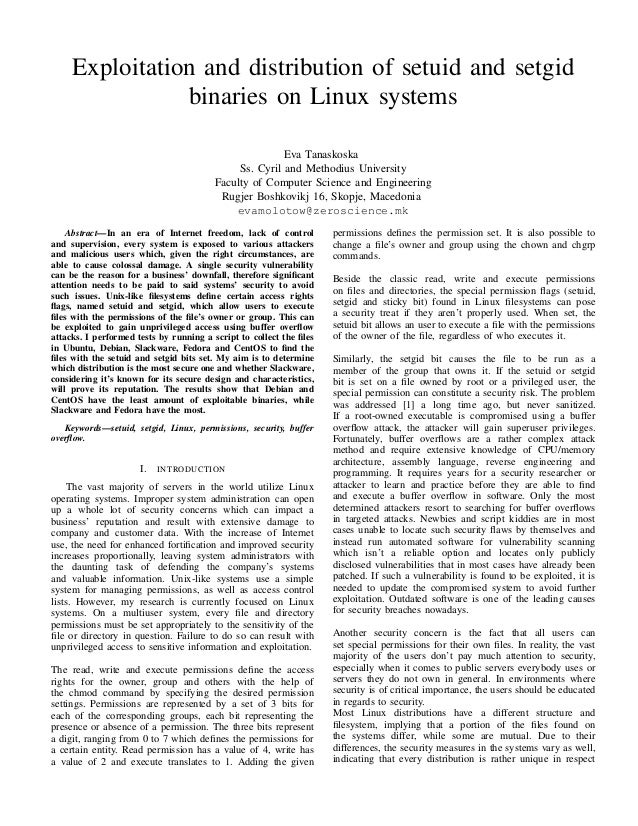 Exploitation And Distribution Of Setuid And Setgid Binaries On Linux