But in 64-bit the first 6 arguments are passed using registers and if there are any more arguments stack is used. Movaps triggers a general protection fault when operating on unaligned data so try padding your ROP chain with.

11072020 Ret2libc Return-to-Libc attack is a computer security attack usually starting with a buffer overflow in which a subroutine ie.

Ret2libc 64 bit attack. I am trying to do ret2libc attack on a program on 64-bit linux pc vulnerable due to strcpy function. Attack is a computer security attack usually starting with a buffer overflow in which a subroutine return address on a call stack is replaced by an address of a subroutine that is already present in the process executable memory bypassing the no-execute bit feature if present and ridding the attacker of the need to inject their own code. The 64 bit calling convention requires the stack to be 16 byte aligned before a call instruction but this is easily violated during ROP chain execution causing all further calls from that function to be made with a misaligned stack.

We are performing ret2libc attack here. We turned off ASLR NX and stack canaries in part 1 so we could focus on the exploitation rather than bypassing these security features. 21042015 This is part 2 of my 64-bit Linux Stack Smashing tutorial.

You can use many other tools but I will use those mainly. 07042014 buffer overflow on x86_64 – return to libc attack linux After having studied and tested various types of attack on 32-bit linux machine shellcode injection return to libc GOT overwriting I focused on the 64-bit world. Ask Question Asked 1 year 1 month ago.

In part 1 we exploited a 64-bit binary using a classic stack overflow and learned that we cant just blindly expect to overwrite RIP by spamming the buffer with bytes. 29072019 The 64 bit calling convention requires the stack to be 16 byte aligned before a call instruction but this is easily violated during ROP chain execution causing all further calls from that function to be made with a misaligned stack. 12082018 This time I will compile the same binary for 32 bit architecture on modern compiler.

Bypassing the no-execute bit feature if present and getting a shell by injecting the code. I am using 64 bit Ubuntu 1710 for compilation so there will be-m32 flag for compiler to force 32 bit architecture. The problem is I have to replace return address with borrowed code and its next block with argument.

In the future we. So you need to call system function with address of binsh string as argument. 02102017 Since the offset in which the EIP control occurs is at 24 the amount of space that can be used for the ROP chain is 52 – 248 which is 7 values on a 32 bit operating system.

Viewed 6k times 9 7. I hadnt any problems in the implementation of a basic shellcode injection attack. Ask Question Asked 4 years 9 months ago.

Although the SEED Ubuntu 2004 VM is a 64-bit machine we decide to keep using the 32-bit programs x64 is compatible with x86 so 32-bit programs can still run on x64 machines. Pwntools 64bit article is still WIP. I have a working exploit to leak libc_base address from server but now i need to calculate systemlibc and bin_shlibc and then call systembinsh.

Handle 0x00 in address 64-bit machines. In this article I give you an introduction on exploiting stack buffer overflows when NX and ASLR security mitigations are enabled. But now Im trying to make a return to.

ROP RET2LIBC on 64bit remote server But How do i Return to Main again to proceed to stage2. The return-to-libc attack on the x64 machines 64-bit is much more difﬁcult than that on the x86 machines 32-bit. 24062019 It is a 64 bit dynamically linked binary nx and aslr is enabled There are many things to be done in binary analyzation but I will just mainly focus on Ret2Libc attack.

The stack is non-executable. Segfault in ret2libc attack but not hardcoded system call. In a ret2libc attack I understand that the return address can be overwritten with the address of the system command which takes a command string as an argument.

The function calling mechanism in 32-bit and 64-bit processes are different. Active 4 years 9 months ago. Next when the bof function is called into the return address is pushed.

Before calling the vulnerable function bof the caller main pushes the FILE badfile argument onto the stack. 13092016 Why must a ret2libc attack follow the order systemexitcommand. Return address on a call stack by an address of a subroutine that is already present in the process executable memory.

I have disabled stack-canaries and address space randomisation. 02042020 an intro to ret2libc. In 32-bit arguments are passed to the callee function using the stack.

First we write a simplified exploit by disabling ASLR and use a technique called return oriented programming to bypass NXWe when enable ASLR and rewrite the exploit to leak data. 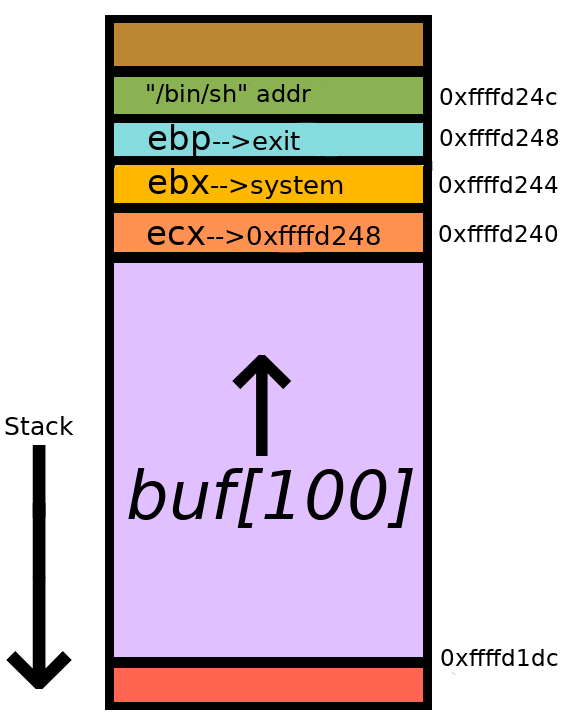