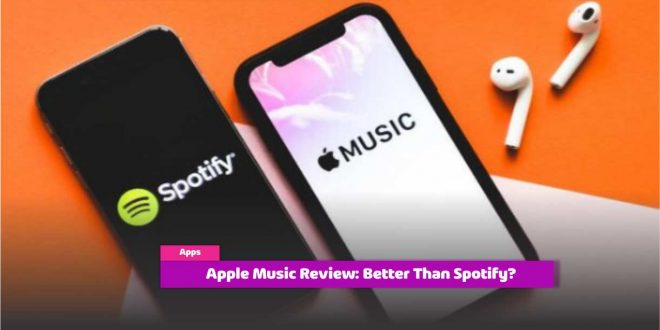 Apple has been a major contender in the tech world since the 90s, and as of 2022, it’s pretty much on top of it. So, it should come as no surprise that the tech giant has developed its own music streaming platform to contend with the likes of Google Music, Spotify, and Amazon Music.

Apple Music is huge with long-time fans of Apple’s tech lineup, but if you’ve been a bit slow to hop on the iPhone bandwagon, you might not know too much about it. That’s a shame since it’s one of the best music streaming platforms out there.

What is Apple Music?

Launched in 2015, Apple Music is a proprietary music streaming service developed and maintained by Apple.

First, don’t get it confused with the popular iTunes platform. That’s an Apple music platform geared towards more of a consumer market, and it’s used to sell digital copies of tracks or other audio content while also functioning as an organizer software for your music collection.

Apple Music’s focus on musical content is just about all it has in common with iTunes. Instead, it focuses less on ownership and more on simply providing the most convenient hub possible for more than 90 million songs.

And all that to be streamed without any need for downloads, paying for individual tracks, or the other drawbacks of iTunes.

If you’re thinking this sounds pretty similar to Spotify, you’re correct. Apple developed Apple Music specifically to contend with the platform that has steadily dominated music streaming since 2006.

How does it stack up against its biggest competition, though? Let’s look at the specifics in our Apple Music review.

The user experience for Apple Music is mostly good, but the few drawbacks it has are more than enough to push some people away.

First, the menus and general layout are superb. Everything is designed in a way that makes it easy to navigate and quick to use.

Then, you have to consider the substantial library that we’ll cover more in-depth shortly. It ensures you’re always bumping into new tracks you’ve never heard of.

But there are plenty of filters and search functions to make sure you don’t have to listen to a bunch of stuff you’re just not interested in.

However, it has a couple of problems. First and foremost, the servers can be a bit dodgy at times. Since it’s a streaming service, 99% of your usage of the platform will be online, and dodgy servers can lead to lackluster responsiveness.

Also, it has been noted that some songs that work perfectly fine on certain devices will refuse to stream on others. This is an odd issue for such a high-end platform, and a bit more uniformity would be appreciated.

Luckily, those two problems don’t present themselves nearly as much as they may seem.

Apple Music’s library is absolutely mindboggling. There are more than 90 million tracks on the platform spread across pretty much any genre you can think of. This is impressive and a major pro for Apple Music.

With such an extensive library, you’re not only guaranteed to find the music you want, but you’re also sure to find dozens of new artists you’ll absolutely fall in love with.

The content library on Apple Music beats the selection available on the vast majority of other platforms. However, it has a drawback.

While other platforms publish podcasts, audiobooks, and even video content alongside their music collections, Apple Music is all about music. This means you’ll have to check out Apple’s other software platforms for other forms of content such as Apple Podcasts.

This isn’t a major issue. If you’re looking for a music streaming app, you’ll be more than satisfied with what Apple Music has to offer, and there are other Apple platforms available to cover the formats missing on the Apple Music platform.

However, that also means downloading more apps, and that can leave your other must-have apps contending with Apple’s offerings; whereas platforms such as Spotify roll everything into one simple application.

Apple Music is on practically everything, but Apple users will have a slightly easier time accessing it. It comes preloaded on all modern releases of Apple devices.

This includes iPhone, iPad, Mac laptops and desktops, iPod, Apple TV, Apple Watch, and every other product they offer. You just turn on your device for the first time, and you have the app ready to enjoy.

Related Post:   The 2 Best Software Stocks to Buy in 2022 and Beyond

However, it can also be added to pretty much every other type of device, too. For Android products, you can find Apple Music on the Google Play Store. This can be done via Android phones and tablets with ease.

For desktops running Linux or Windows, you can simply visit the Apple Music website and use the browser-based platform. All the same, features are available. It’s just changed to a browser-based program instead of an application.

Beyond that, you also get to use the platform with various forms of car speakers, and it’s fully compatible with products such as Amazon’s smart speakers and various other brands of smart speaker technology.

Apple Music has a lot to offer to all of its users thanks to the business model it uses, but we’ll talk about that later.

For now, let’s talk about its main features.

First, the music is ad-free, and you can sift through songs without dumb limitations like limited skips. Right off the bat, that’s a major advantage against its competitors.

However, you also get access to Beats’ 24-hour radio, online and offline listening, original releases and exclusive concerts from your favorite artists, and the ability to download up to 100,000 songs to your personal library.

There are other minor features that beef up its total value, but these are the main features that are likely to draw you in the most.

At face value, Apple’s audio quality SEEMS lower than Spotify’s. Whereas Spotify can stream at 320kbps compared to Apple’s 256kbps, Apple also uses a proprietary audio codec to make the most of its streaming speed.

So, it doesn’t require nearly as fast of a streaming speed to deliver the same high-quality audio. Also, like Spotify, Apple’s platform comes with a variety of audio presets you can use to quickly change the audio quality on the fly, and it makes use of iTunes’ equalizer software.

If you download iTunes alongside it, you can use the equalizer to custom-tune your audio experience. However, that’s a bit complex for the average user, and the presets are much better options for casual listeners. It is good to have the option to take complete control over it, though.

This is where Apple Music tends to lose some steam. While it is on-par or better than the competition when it comes to its music library and feature quality, it comes at a price.

Apple Music costs $9.99 per month, and there isn’t a free tier that lets you use the app’s core features at no charge. This is why all of the music is ad-free and you get more control over your experience; Apple isn’t trying to score ad revenue for free services.

$9.99 is a fair price if you plan to get a lot of use out of the app, and the features available are substantial enough to warrant the price. However, it would still be nice to get some sort of limited free tier in the subscription model.

However, Apple does offer a 1-month free trial to all new users. So, you can see if you even like the app before you pay a single dime on it. Sometimes, the service even offers 3-month free trials –which is what the original trial period was when the platform first launched-.

You also have the option to get a family plan subscription at a reduced rate. This is more expensive than a single subscription, but it supports up to six users on different devices, and it’s a lot cheaper than paying for six users individually.

Overall, you shouldn’t concern yourself with the price too much. Apple has put a lot of value into the service, and audiophiles will get much more than $9.99 worth of value out of it each month. Even casual users will likely feel as if it’s money well-spent.

Apple’s service is pretty great if I say so for myself, but it does have some major drawbacks that you should consider before committing to a plan.

First, you get one of the largest music libraries available on any service, and that’s easily one of the biggest draws. Not only that, but that music is completely ad-free, and you don’t have to worry about any annoying skip features limiting what you’re able to listen to. You get full control of your music experience.

Also, getting access to exclusive live concerts from top artists is any audiophile’s dream, and Apple makes that happen at no additional charge. If you have the service, you can tune into concerts the second they go live.

Overall, the feature list for Apple Music is probably its biggest strength. It gets rid of the annoying parts of other services, and it aims to create the smoothest, most enjoyable experience possible.

It’s not without its faults, though. Let’s take a look at the cons down below.

The cons for Apple Music aren’t plentiful, but the ones it does have are serious enough to pay attention to.

First and foremost, this is a paid service. Now, it’s perfectly fine for Apple to expect payment for such a well-rounded service that doesn’t push ads in your face.

But one thing that comes along with a paid monthly subscription is the expectation of perfection, and this is where Apple messes up the most.

While the features are great, the library is extensive, and you get access to tons of included goodies like concerts and Beats Radio. However, does that matter if the servers cut out or slow down at random?

You pay a premium for access to the best of the best, and the servers act up occasionally. That’s okay with a free service, but you expect more from a paid subscription.

Luckily, it doesn’t happen often enough for me to tell you to look at an alternative. It’s just really annoying when it does occasionally happen.

Also, the lack of podcasts and similar content means you’ll have to download separate applications to get all that Apple has to offer.

This can be a pain on mobile where space is limited, and you don’t want to make your other beloved apps compete for space with three or more Apple apps that could have been streamlined into one service.

Is Apple Music Worth It?

Apple Music is one of the best music streaming apps out there. If you’re an audiophile, you’ll absolutely love it, and you won’t mind paying $9.99 per month.

However, if you’re a little more casual, you might want to consider some things first.

If you can answer yes to those questions, it’s worth every penny. However, it’s still not for everyone.

If you don’t have the time to listen to music or tune in to some of the time-restricted features like live concerts, you won’t be getting your money’s worth, and you’re probably better getting Spotify’s free subscription tier instead.

Take the time to weigh the pros and cons yourself, and if you’re still on the fence, take advantage of the 1-month free trial Apple Music offers. That’s plenty of time to see if the service is worth it for you.