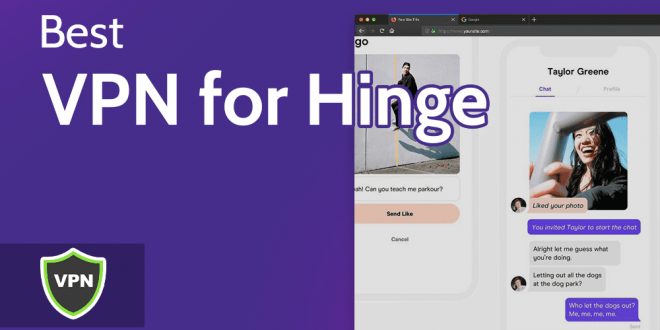 While most dating platforms tend to take a more fun and playful approach, Hinge errs on the more serious side of things. It’s a mobile dating platform that takes some getting used to, especially if you’re from another platform. However, Hinge is only available in select countries, which necessitates the use of a VPN for Hinge.

If you want to match Hinge app users in another country, you can use a VPN service to change your Hinge location to see a different match group. This is useful if you are planning to travel to another country or are looking for a long-distance relationship.

A VPN service lets you change your location virtually, but it also increases security by encrypting your connection and hiding your real IP address. There are many VPNs out there that will let you access Hinge from anywhere in the world, but these three tick all the boxes – servers in the right countries, a good app for mobile devices, and solid performance and security.

Spoiler alert: ExpressVPN is our favorite VPN for Hinge, but read on to see two alternatives as well.

Do I need a VPN for Hinge?

Hinge is currently available in 20 countries worldwide. If you are not in one of the supported countries, you will need to connect to a VPN server in a country. A secure VPN lets Hinge think you’re in one of those countries, and you can see and match people there.

Related Post:   The 20 Best Email Apps For Android And iOS

If you travel abroad and want to see who is using Hinge in the place you are visiting, you can change your server location to that country and check profiles in advance. Here is a full list of countries where Hinge is available:

What Makes the Best VPN Service for Hinge Dating?

Given Hinge’s limited availability, our most important criteria when choosing a VPN for Hinge were servers in the locations where Hinge is available. All of the following VPNs cover most if not all locations where you can access Hinge.

We also looked for a mobile app for each VPN service since Hinge is only available on mobile. All of the VPNs we have selected have excellent mobile apps. Last but not least, we’ve made sure all VPNs work well and keep your connection safe while browsing singles on Hinge.

Related Post:   The 7 Most Popular Sleep Apps For Android and iPhone

ExpressVPN’s no-compromise approach comes at a price, but if you’re willing to pay a little more, it’s well worth it. NordVPN and Surfshark are cheaper options that both have large server networks and solid mobile apps, so you can’t go wrong with either of them. All three offer excellent security and online privacy, but there are a few features that set them apart.

The 3 Best VPN Services for Hinge

Let’s take a look at the top three VPN providers that we can use to access Hinge from anywhere. Each of them keeps your browsing speed high, offers servers in multiple countries, and encrypts your web traffic, but which one is the best? We’ll start with our favorite – ExpressVPN.

Related Post:   Stay Fit in Your Home with a Versatile Pilates Wall App!

ExpressVPN tops our list of the best VPNs. That still applies if you want a VPN connection to access Hinge. It has a solid set of security features including Lightway, a proprietary protocol that offers security without sacrificing performance. You can learn more about it in our ExpressVPN review.

The VPN has servers in 94 countries, so you can choose which Hinge location you want to tunnel through. The iOS and Android mobile apps are very easy to use and have minimal impact on your device’s performance. In terms of features, you have a kill switch and split tunneling, as well as obfuscated servers.

Built from the ground up around the wolfSSL encryption library, ExpressVPN’s Lightway protocol offers excellent security without sacrificing performance. Compared to OpenVPN (which we did), one of the most popular protocols out there, it’s both faster and more secure.

The only major downside with ExpressVPN is its pricing. It’s more expensive than most, even if you go for the annual plan. However, if you want a no-compromise approach and the ability to use the Hinge app (or any other dating site) from anywhere, it’s definitely worth it. There’s even a 30-day money-back guarantee if you don’t like it.

NordVPN’s large server network makes it the perfect tool for accessing dating apps like Hinge. It also gives you an app for almost every platform, as well as a range of security features to ensure your internet connection remains private while you go out online. You can find out more about this in our NordVPN review.

NordVPN has over 5,000 servers in 60 countries. The large server network allows the VPN to always connect you to a VPN server that offers the best possible performance and security. On the other hand, we’re not fans of the impact NordVPN’s Android app had on our device – it consumes a lot of memory and can slow down budget smartphones and tablets.

Rather than reinventing the wheel like ExpressVPN, NordVPN took the existing WireGuard protocol and enhanced it to make it much faster. NordLynx’s encryption is just as powerful as WireGuard’s, so you can go about your online dating without worrying about your connection being compromised.

In terms of price, NordVPN is in the middle – it is not cheap, but it is anything but expensive. A two-year subscription gets you a much cheaper price, and there’s a 30-day money-back guarantee if you don’t love it like you hoped.

Surfshark is one of the cheapest VPNs provided you subscribe to it for at least a year. It lets you easily unblock websites and dating apps like Hinge, and it offers as many simultaneous connections as you want, allowing you to share your subscription. You can read more about it in our Surfshark review.

Surfshark has servers in 65 countries, although the actual number of servers is still lower than NordVPN at 3,200. You can tunnel through multi-hop servers, which route your connection through two servers instead of one, adding a little more security to your dating experience. Features include a kill switch, split tunneling, and obfuscated servers, which are standard for VPNs these days.

If you have more than one person in your house (or your group of friends) who want VPN protection, Surfshark lets you connect as many devices as you like at the same time.

Surfshark is the cheapest choice on our list, although its monthly plan is unnecessarily expensive. It’s not the fastest VPN out there, but it’s reliable and gives you easy access to Hinge and other popular dating apps. You also get a 30-day money-back guarantee.

All VPNs above let you choose a Hinge location to use the dating app from anywhere. The premium choice of choice is ExpressVPN, but both NordVPN and Surfshark will do a good job as well.

Are you ready to start browsing profiles on one of today’s most popular dating apps? Splurge big and enjoy ExpressVPN’s no-compromise approach, or save some cash with NordVPN or Surfshark? Let us know in the comments, and as always, thanks for reading.