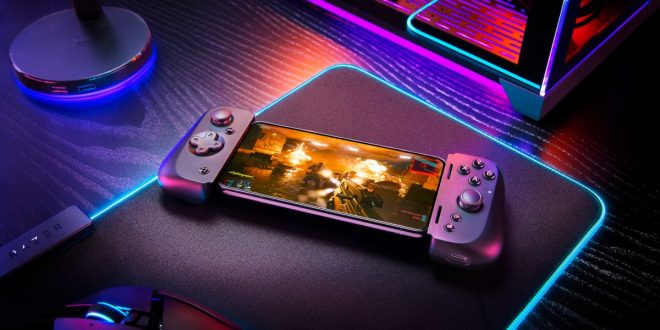 The Razer Kishi V2 answers the question, “How do you improve on an already great product?” Razer returned to the drawing board to develop the sequel to their successful and popular product kish Mobile controller of 2020. The new version has a fresh design, button upgrades and access to the new Nexus app.

The Kishi V2 is now my pick for the best mobile gaming peripheral. While people with big hands might find it a bit small, I think the new ergonomic grips make holding the V2 more comfortable for long periods of time. Most people will love the tactile buttons. I’ve even found Nexus useful as a central hub for your gaming and streaming needs. In fact, I think the biggest downside to the Kishi V2 is that it’s only available for Android for now, although an iPhone version is said to be coming later this year.

In this Razer Kishi V2 review, I’ll explain why this is the best Android controller you can get right now.

The Kishi V2 was launched on June 8th for $99. You can buy yours directly from Razer or from Amazon. I expect other retailers like Best Buy will follow suit. The Kishi V2 competes with the GameSir X3, which also costs $99.

If $99 seems a bit steep for a mobile controller (you can pick up an Xbox One controller and phone clip for less), the original Kishi has seen significant discounts of late. Assuming you’re not concerned about compatibility with your phone or interested in tactile buttons, this could save you some money.

If you know the original Kishi, you may have trouble recognizing the Razer Kishi V2. Gone is the super compact storage mode with the straps to hold the phone and controller together. The V2 now features a spring-loaded clamping mechanism with a bridge for a backbone. The new version can also support slim phone cases with the included inserts.

The design of the handles has also changed and are now more ergonomic than before. The grips also have a textured feel, making them more comfortable during longer gaming sessions. And the controller’s monochrome aesthetic speaks to my minimalist sensibilities. The Kishi V2 makes a statement with its utility, not its looks.

Just like its design, the Razer Kishi V2 has received a hardware refresh. The new tactile button switches are the highlights of this new model, offering solid and clicky feedback with each press. This applies to the directional pad, face buttons, four secondary buttons, two assignable buttons, and the shoulder buttons. The Kishi V2 retains the spring triggers of the V1.

This controller also has more than just the typical home and back/share buttons. You can find those two here, yes, but the Kishi V2 also has shortcuts to take screenshots and open the Nexus app.

The new bridge mechanism holding the controller together feels sturdy. Both sides of the Kishi V2 clamp firmly on the three phones I’ve tried (Pixel 6 Pro, Galaxy S22 Ultra and OnePlus 10 Pro), which helps me feel confident that the Kishi V2 won’t lose sight of my devices. I appreciate that the new model offers better compatibility with problematic phones like the Pixel 6 Pro with its camera bar. The original Kishi didn’t work well with this handset at all.

My only concern with the new hardware design is the USB-C port. It stays firmly in place, which annoys me a little when I take out my phone. Other controllers such as PlaySir X2, feature a swivel connector to allow for installation and removal. I want to warn you to be very careful when using the Kishi V2 so you don’t strain your phone’s port or USB-C port.

The Kishi V2 immediately convinced me with its ergonomics, although I found it a bit small for my large hands. Granted, this isn’t an issue unique to this controller, but those of you with big hands should take note.

While the original Kishi kept things simple by offering a solid mobile controller experience, the Razer Kishi V2 adds some software to sweeten the deal. Nexus, a new app from Razer, can be combined with the Kishi V2 and offers you a multitude of advantages.

Not only does Nexus act as a hub for all your games, making it easy to pick and play what you want, but it’s also how you control the Kishi V2. Nexus offers button remapping and firmware updates. You can also set up streaming broadcasts via YouTube or Facebook right from the app, although the lack of Twitch raised an eyebrow from me. I don’t usually like additional apps – and I was skeptical about these ones – but I thought Nexus would have real utility.

You don’t need to install Nexus if you don’t want to, but I would recommend doing so from time to time to ensure the Kishi V2’s firmware stays up to date. If you are one of the The best gaming phones that has a game hub built into the software, then Nexus might feel a bit redundant or crippled. For example, Nexus cannot optimize your device’s performance like some gaming phone hubs can.

Whether you want to play local games on your phone or stream titles via Game Pass, GeForce Now, or Steam Link, the Kishi V2 is an essential companion. Not all Android games support it, however, with notable outliers like Genshin Impact refusing to work with the Kishi V2.

I loved the original Kishi and have used it for countless hours, but I think the V2 is an improvement in every way. You may not need the Kishi V2 if you already have the V1; Otherwise, if you’re looking for the premium controller experience for your Android phone, this is it.