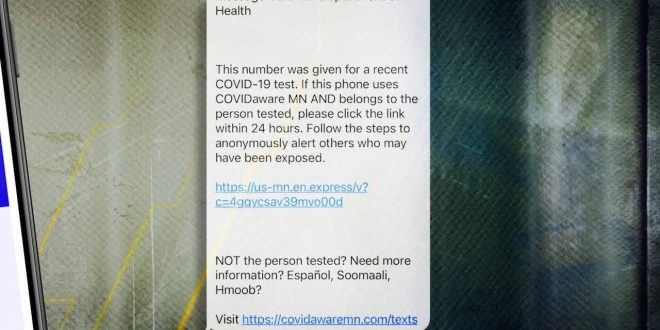 Minnesota officials say the COVID-tracking app is a crucial tool in fighting the pandemic. Few people actually use it.

Technology touted by state officials to slow the spread of COVID-19 is rarely used by the millions of Minnesotans who have it on their phones, an analysis of state data shows.

The state introduced the “COVIDAware MN” app in November 2020. The app notifies a person that they may have been exposed to someone who has tested positive for COVID-19.

However, the app’s effectiveness depends on the person who tests positive being willing and able to enter a code generated by the state health department.

In the year and a half that the technology was online, the state generated 653,362 Codes associated with positive COVID test results. The data analyzed by 5 INVESTIGATES shows that only 57,402, less than 10%, were reinserted into the app.

User rates were even worse when the Omicron wave hit Minnesota in January. Government data showed that in the week after cases peaked, only 4% of codes sent to COVID-positive patients were used on the app.

Despite the low turnout, state officials defended the technology.

“We’re pretty confident, certainly in Minnesota, that this, along with other actions, has resulted in two really, really critical things: saving lives and reducing the spread of COVID-19,” said Tarek Tomes, commissioner of the Minnesota Department of Information Technology, or MNIT .

To date, more than 2.7 million people in Minnesota have opted in, either by downloading the app or by enabling exposure notifications on their Apple devices.

But Andrew Loo said the app hasn’t delivered on what the state promised.

As a cancer survivor, Loo downloaded the app as soon as it became available because he said he wanted to protect himself, his wife (who works in healthcare) and everyone else they came in close contact with.

“I was hoping it would help people, but it just didn’t work out that way,” Loo said in an interview with 5 INVESTIGATES.

After his positive COVID test, Loo expected to receive a text message with a code to paste into the app. When he didn’t get that message, he called the Minnesota Department of Health.

“They said I would get a code, but I didn’t,” he recalls. “I called again and they said it was on the way.”

“We both thought, are you kidding me?” he said.

Related Post:   The 7 Most Popular Sleep Apps For Android and iPhone

“By that point, I was already outside the quarantine window,” he said. “I’ve been thinking what’s the use of chasing this further.”

5 RESEARCH confirmed other users had similar issues. During the Omicron wave, a person who received a code from the health department didn’t bother entering it into the app because the text message came 10 days after the positive test.

Tomes deferred questions about these delays to Health Department officials, who declined several interview requests on the matter.

MDH issued a statement to 5 INVESTIGATES, which said in part that since the technology was brand new, the department “had no expectations for performance” and that the demand for testing during the Omicron wave “challenged every aspect of the maintenance of.” testing systems have been emphasized by the state and others, resulting in some test results being provided later than would normally have been the case.”

Exposure notification technology came online in Minnesota at a time when contact tracing resources were scarce and vaccines were not yet widely available to the general public.

The COVIDAware MN app does not collect any personal information, a point Governor Tim Walz emphasized when announcing it was available for download.

“This is an opt-in alternative,” he said during a daily news briefing in late November 2020. “You don’t have to put the code into your phone and you don’t have to notify anyone else around you. I urge you, if not ask you, please do.”

The app has been hailed as a low-cost, low-maintenance but highly efficient way to track Covid.

It was created by the state in partnership with the nonprofit PathCheck Foundation at a one-time cost of $170,000. There are no government employees tasked with maintaining the app.

A year and a half later, the state is now blaming COVID fatigue for low usage numbers.

“You have to make things like this as easy as possible,” Tomes said in an interview. He also acknowledged that the state needs to re-examine its process for issuing codes to positive COVID patients.

“One of the things that we’ve seen and will continue to work tirelessly to do is do whatever it takes to get those deadlines down,” Tomes said.

However, the limitations of the technology raise questions about its future effectiveness. Currently, people who test positive on an at-home test cannot use the app.

According to Tomes, the state is currently considering adding a “self-reporting” option that would allow people who test positive at home to use a code in the app without MDH verifying the result through a lab-based test.

In a statement, MDH said as the widespread use of rapid home testing has increased, “We are exploring how best to adapt to this new reality so COVIDAwareMN remains relevant and can best serve Minnesotans as it does.” was intended.”